Scott Hrabko…don’t get out much: music ramblings at the Broadway Café 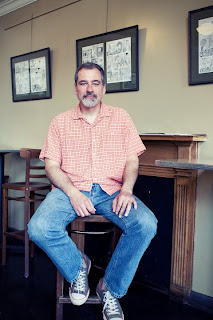 Scott (the “h” is silent unless you want to breathe deeply before saying his name) Hrabko gets out enough, thankfully. He’s about a year into a solo acoustic guitar songwriting journey that started a few decades ago with his group called the Splinters. Great art, like black and white photography, uses contrast to affect us. Scott juxtaposes the finger picking style of folks like Mississippi John Hurt, Elizabeth Cotton, and John Fahey with his own ironic poetry that celebrates the humorous and clever, the old blues with something new, life in the present tense. He likes to live in his songs.

I liked living there too for the two times I’ve seen him play. First time was at Kirsten Paludan’s Troubadour Music Club (at the Bulldog) on a Wednesday night in April. Last week, I listened to Scott follow a great set by Gary Paredes at the Riot Room in Westport. Scott and Gary delivered us masterful guitar work and original songs that night. I need to catch up with Gary soon after he finishes his new kitchen…

Today, Scott shared a bit of his Wednesday afternoon to discuss music and life in general.

Scott’s music has a transporting quality to it. It’s like a train ride through some beautiful American valleys and vistas with echoes of Celtic rhythm as a faint heartbeat. It’s a trip to Parchman Farm Prison in Mississippi without the life sentence and roadwork, with words that may have you visualizing a page from American Splendor, reading your modern life in a mirror with the cadence of guitar picking that’s primordial and simply elegant. Scott may not get out much, physically, but he’s definitely getting out of himself and crafting a unique style of composition and performance.

What fuels this? Family, first off. I agreed not to drag his wife and son into this piece, so I won’t but let’s just say that this starts with a great deal of love at home for those of you dreaming about going out to the crossroads somewhere seeking a deal with the devil. Second, Scott recognizes the beauty of having an audience; that feedback, not unlike his pre-amp (a Mama Bear) that adds some sweet edgy “almost feeding back” juice to his performance sound. Then again, maybe his family is his real pre-amp of sorts…

Often musicians pause when asked their influences. Scott offered them without prompting: Loudon Wainwright III, Mississippi John Hurt, and Nick Drake. He connects with their guitar work and writing. This is rich food for the soul and ears, these three examples. Scott seems to appreciate the human enterprise, the risks and hard work associated with creating art. He shared a great deal but listened intently as well. We both laughed when the coffeehouse soundtrack shifted from Dylan to heavy metal for few songs. Here’s someone who hears and crafts nuance.

In addition to creating great “songscapes”, this musician also illustrates with the pen, pencil, paper, and lately with digits. Does he compose visually? Another afternoon required to determine this, maybe.

Nuance and irony. Scott’s becoming comfortable with Scott. Scott appreciates the corniness of country, cuts pieces of his life and glues it together in a collage, and knows that to be vulnerable is to be courageous. He’s balancing the comfort with the edge of creativity, the practice, the nervous uncertainty of solo performance, and offering new songs as food for your thoughts. Life looks to be that contrast of basement-time, solitary, playing and practicing, building the hard calluses confronted with the raw, but not often tender nature of a room full of people who may or may not listen. Practice and calluses get you to a place of focus whereby you can smile and stare the audience in the eye and take them somewhere. Sounds simple, like making a collage, right?

It’s time to record some of this collage. He’s ready. Get ready…